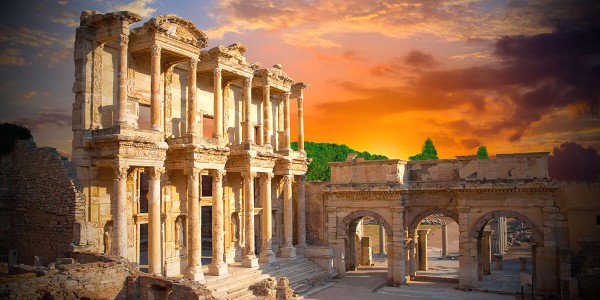 It is a great loss to come to Aydın Kuşadası or Izmir Selçuk and not to see Ephesus Ancient City. When you decide to visit the ruins of Ephesus I would definitely recommend using the professional guidance service. Ephesus ruins are very hot from June to August between 11 am and 15 am, the sun rays and the heat reflected from the stones can disturb you. If you want to visit the ruins of Ephesus, you should wear light-colored clothes, sunglasses, hats and sport shoes that day. You should also take plenty of water in your bag. 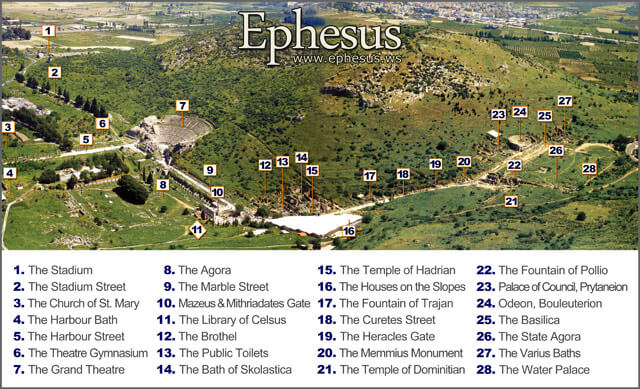 You can plan the places you can visit from the ephesus map.
The entrance fee to Ephesus ruins is 75 Turkish Liras (TL). If you pay 75 TL at the entrance to Ephesus Ancient City and get a Museum Card, you can get unlimited access to museums and ruins for 1 year. (It is extra concrete to see Slope Houses in Ephesus ruins, the museum card is not valid here.) Also, with this card you can visit Istanbul Galata Tower or other Turkish treasures.

From the Hellenistic period, this city occasionally experienced major earthquakes, collapsed and rebuilt. Due to the alluvium brought by the Menderes River, the port city has lost its feature. Ephesus is a 2 km area for sightseeing. Today, 15% of the ruins of Ephesus have been brought to light. Tourists coming from Kuşadası Harbor with great ships visit Ephesus ruins and Virgin Mary’s house all year round.

Ephesus is a historic Greek city located on the western coast of Turkey and dating from the Roman period of Izmir to the Selçuk district. It is one of the 12 cities of Ionia in the classical Greek era. BC 6000 is the year Ancient City was founded. Ephesus was the capital of the Asian state during the Roman Empire. Because of its position, it was also one of the important port cities that had been serving as a bridge between west and east at that time. Ephesus is very important for our country because it is home to the Temple of Artemis as well as the commercial and political prejudice it had in the past. Ephesus, which is a place where science, art and culture are famous in many fields, was adopted as a pilgrimage site by Christians today because it is also the first place where Christianity spreads.

Since Ephesus Ancient City has been displaced many times throughout its history, its remains extend over a wide area of approximately 8 kilometers. Ayasuluk Tepesi, Artemision, Ephesus and Selçuk are visited by an average of 1.5 million tourists per year. The main structures and works in Ephesus, the first city made entirely of marble, are as follows:

Temple of Artemis: Temple of Artemis, one of the seven wonders of the world, is the first marble-built temple of the ancient world and its foundations date back to the 7th century BC. Built by the Lydian king Croesus, dedicated to the goddess Artemis, the building was adorned with various bronze sculptures designed by a Greek architect and made by the greatest sculptors of the time. Its size is 130 x 68 meters and ten pillars turn west like the other temples of Artemis (Mother Goddess). The temple was used both as a marketplace and as a religious institution. Artemis Temple was burned by a Greek named Herostratus who wanted to immortalize his name in BC 356. The same night Alexander the Great was born. When Alexander the Great conquered Anatolia, he offered to help rebuild the Temple of Artemis, but he was rejected. There are only a few marble blocks left from the temple.

Celsus Library: One of the most beautiful buildings of the Roman period, the building has served both as a library and as a tomb monument. When Celsus, the governor of Ephesus, died in 106, his son had the library built as a tomb monument in the name of his father. Celsus’s sarcophagus is under the western wall of the library. The Front was restored between 1970-1980. Book rolls in the library were hiding in the niches on the walls. 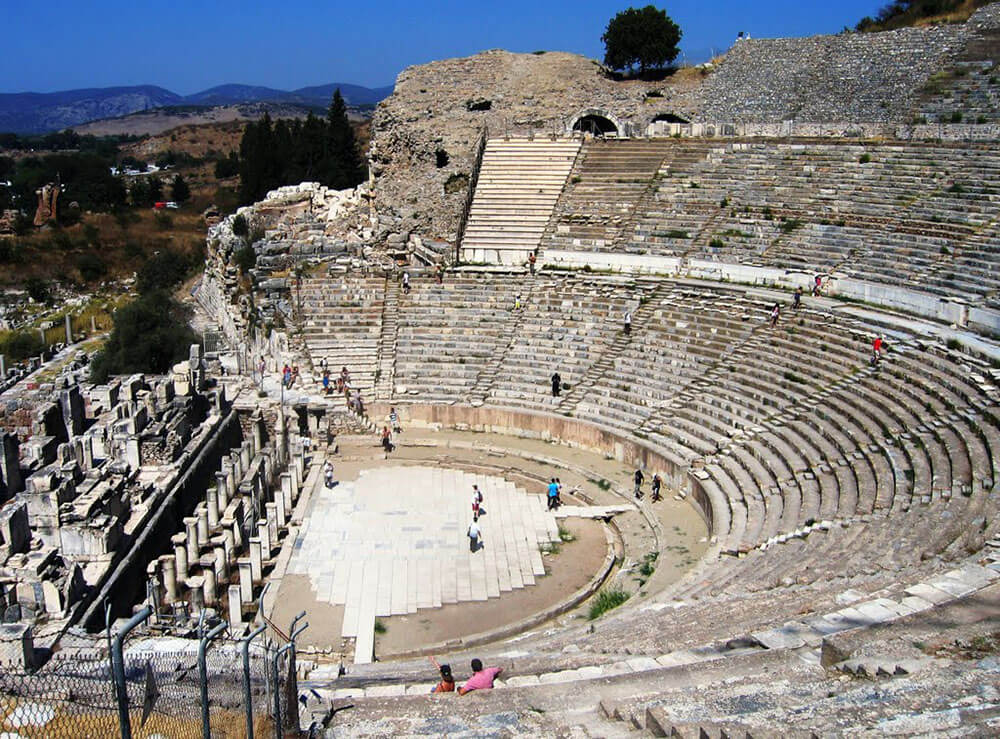 The Great Theater of Ephesus Ancient City, located on the western slope of Panayırdağ, faces west towards the harbor. Thus the greatest structure of the city can be seen from a distance by the sight of your cruise ship. In the Hellenistic period, the natural rock structure of the slope was constructed as an infrastructure. The Ephesus Antique Theater, built in the Hellenistic period with a seating capacity of 24,000, is one of the most dazzling parts of the Ephesus ruins. The theater is also the best protected area of Ephesus ruins and the largest area with a diameter of 150 meters. During the Roman Empire, many gladiatorial battles took place in this theater. The building also served countless meetings outside the theater displays and gladiatorial fights. During the Byzantine period, a part of the stage building was added to the city walls and lost its function when it began to be used as a watch tower.

Virgin Mary’s House: In Bülbüldağı, Jesus’ mother is believed to have spent the last years of Mary with St John. It is a place of pilgrimage for Christians and visited by some popes. 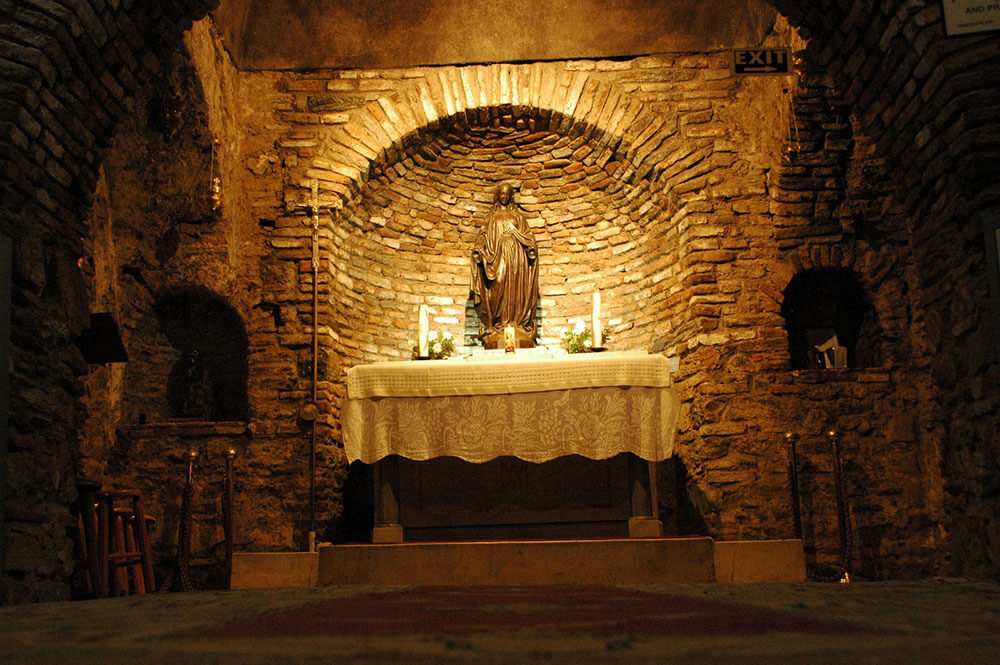 It is believed that Mary’s grave was in Bülbüldağı but the grave of Mary is in Silifke, Mersin, as mentioned in the Bible.

Seven Sleeping Cave (Ashab-i Kehf): This place, which was converted into a grave church in the Byzantine period, is a cave where the seven Christian generals who escape from the oppression of the pagans have sheltered on the foothills of Mount Panayir. Though there are 33 cities in the world claiming that the cave is within its borders, according to the majority of Christian sources, the city is Ephesus, which is considered holy by Christians. There is another cave in Turkey known as the Seven Sleeping People Cave. This cave is also an important center of the period and the birthplace of St. Paul in Tarsus. The tombs belonging to the 5th and 6th centuries were found in Ephesus as a result of an excavation carried out between 1927-1928. The inscriptions dedicated to the Seven Sleepers are found both in the graves and on the church walls.

St. John Castle: The highest point of the Ephesus region is glass and water cisterns. In addition, this hill, where St. John’s Church is located, is the first settlement area of the ancient city of Ephesus.

İsa Bey Mosque: Isa Bey of Aydınoğulları built this mosque on Ayasuluk Hill between 1374-1375. The rich artifacts and china of the mosque exhibiting the first examples of Anatolian mosque architecture are worth seeing. The mosque was also used as a caravanserai in the 19th century. The mosque is located between the Temple of Artemis and St Jean Church.